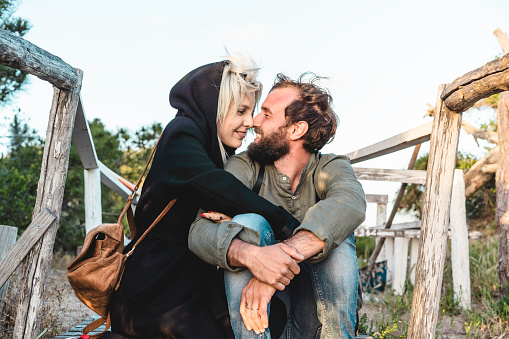 According to some researchers kissing began millions of years ago as a result of mouth-to-mouth feeding, with mammal mothers chewing food and then “forcing it” into the mouths of their young.

“From these observations, it is claimed that humans also learned kissing from exchanging food between mothers and their offspring,” Texas A&M University anthropologist Vaughn Bryant, who has long researched the history and spread of kissing, told Discovery News.

“However, if this were true and it was innate, then why didn’t all humans kiss? We know that many cultural groups did not kiss and knew nothing about it until they were shown,” Bryant said.

While the true origin of kissing remains a mystery, historians have found in India the earliest references to the practice.

READ MORE:  7 Secrets You Must Not Tell Anyone If You Want To Succeed In Life

Four major texts in the Vedic Sanskrit literature suggest an early form of kissing. Dating from 1500 B.C., they describe the custom of rubbing and pressing noses together.

“Eventually, someone slipped and found that the lips were very sensitive and found it pleasurable. That’s one theory on how it started,” Bryant said.

“She set her mouth to my mouth and made a noise and that produced pleasure in me,” it said.

The historic reference continues with the Kama Sutra, a classic text on erotica written during the early fifth century A.D, where descriptions of kissing techniques abound.

Around 326 B.C., kissing began spreading from India, thanks to the conquering armies of Alexander the Great.

“They learned about kissing from the Indians. After the death of Alexander, his army split up and his generals went to various areas of the Middle East,” Bryant said.

In a French kiss, the boundary between you and your partner becomes blurred. It involves penetration and receptivity, vulnerability, and assertion. It’s a simple, playful way to test interpersonal chemistry and physical compatibility. Below, you’ll find a list of reasons why people like it so much.

1. Because It Feels Good

According to Sheril Kirshenbaum, who wrote The Science of Kissing: What Our Lips Are Telling Us, the lips are your largest “exposed” erogenous zone (because she assumes you’re wearing pants). Because some people’s mouths have even more nerve endings than the tips of their fingers, they might get even more information and pleasure from kissing than they get from other kinds of touching. And not only is there a huge concentration of nerve endings in your lips, but the lips also have one of the thinnest layers of skin on the body. This means for extra-extra, amplified sensation.

Kissing also stimulates the release of hormones in the brain—dopamine, endorphins, and oxytocin—which promote attachment, happiness, pleasure, relaxation, and bonding. As a drug, if it had a label, a kiss boasts a long list of positive—and relatively few negative—side effects.

So whether the kiss is hard, soft, slippery, or penetrating, it lights up those receptors of your brain like a jackpot on a slot machine. In fact, Kirshenbaum says that even the lightest stimulation on the lips can engage more of the brain than genital stimulation can.

2. Because It Gives You a Lot of Information About Your Partner

You can learn a lot about a person with a French kiss. One kiss can offer probing, tangible insight into what your partner is really like inside: playful, aggressive, daring, tentative, curious, creative, empathetic, a kiss can speak a thousand words. It’s like tasting another person’s essence. A French kiss can be a fairly quick and accurate test to see if there’s any compatibility—physical, interpersonal, or chemical—between you.

READ MORE:  10 Tips And Tricks to Kiss Your Partner and Make Her Long For More

During a kiss, you learn a lot via your partner’s smell, touch, and taste. A French kiss involves so many different types of receptor cells—olfactory via the nose, touch via the skin’s tactile corpuscles, taste via the tongue. Not to mention all the things your other body parts are doing during the kiss. And the more types of receptors that are involved, combined with the number of receptors cells activated, all serve to increase and heighten the pinnacle of sensitivity achieved in a French kiss.

A 2007 study suggests that females might be more inclined than males to use kissing as a means of assessing a mate’s compatibility and initiating, maintaining, and gauging a relationship’s current status. In other words, for many women, a kiss can be a test.

What can you learn from a kiss?

Did you know? You’re much more likely to get sick from shaking hands than from kissing.

READ MORE:  11 Things You Should Know Before Kissing Your Partner

3. Because Kissing Is Good for You

Kissing is good for your health in many ways:

Kissing can promote the health of future generations.

Some researchers have focused on the fact that kissing allows a couple to get close enough to smell each other. And, since our scent is an indicator of our particular immune system (and our unique collection of histocompatibility complex genes), some theorize that we use our sense of smell to sniff out the best biological partners. Genomic differentiation increases our chances of producing offspring with more diverse immune systems. In other words, you may be more attracted to those who have different genes from you, and this difference is detected with a kiss.

What Happens to Your Body When You French Kiss

During a deep, enthusiastic French kiss with someone you like. . .

READ MORE:  5 Life-Changing Laws to Achieve Anything You Want in Life

Why Do We Call It “French” Kissing?

The term “French kiss” was first included in the Oxford English Dictionary in 1923, but exactly when and where it was coined is unclear. In The Science of Kissing: What Our Lips Are Telling Us, author Sheril Kirshenbaum says that French kissing became more popular after World War II.

“It’s possible that ‘French kiss’ was adopted because American travelers were impressed by the affectionate nature of French women, who were more comfortable with open-mouthed kissing than their counterparts. According to anthropologist Vaughn Bryant, this led to a popular saying: ‘While in France get the girls to kiss you,’ which later turned into ‘get a French kiss.'”

Watch the video below:

THANKS FOR READING! PLEASE DON’T FORGET TO SHARE THIS ARTICLE WITH OTHERS.