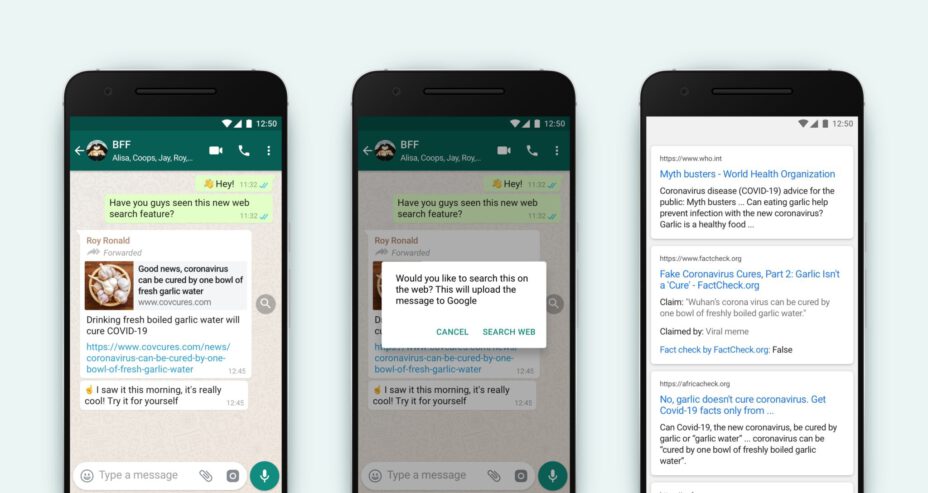 WhatsApp has announced a new way for users to quickly search the web for its authenticity in order to reduce the spread of fake news and messages on its platform.

WhatsApp had previously limited the forwarding of popular messages to just five contacts. And once you reached that limit, users were limited to forwarding chats to just one user at a time. It also introduced an icon with double arrows to let users know that this was a forwarded message. Now, the messaging service plans to show a web search icon besides such forwarded messages. Tapping on the button will allow users to quickly search the web for the message so they can find out its authenticity.

The message is passed on for Google search without WhatsApp ever knowing the contents of the message. The feature is currently being rolled out to WhatsApp users in Brazil, Italy, Mexico, Spain, UK, and the US. It will be available for WhatsApp on Android, iOS, and web. Interestingly, the feature has not been rolled out in India, the largest market for WhatsApp.

READ MORE: WhatsApp for iPhone May Finally Get One of the Most Requested Features

Considering how widely WhatsApp is used to spread spam and fake messages, this is an important move from the company as it will allow users to quickly distinguish between real and fake news particularly during the current times.

Do you regularly receive fake news on WhatsApp? If so, what do you do about them?