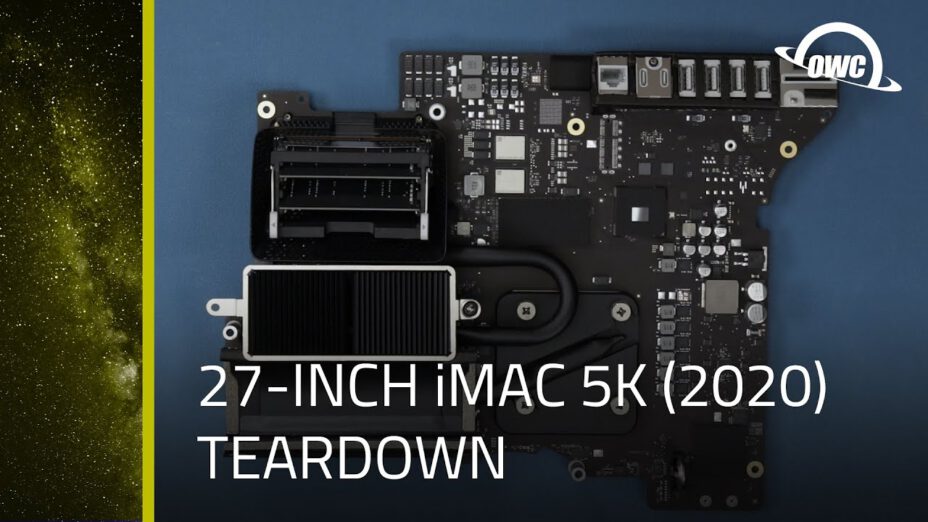 The 27-inch iMac has been given a teardown treatment by OWC revealing all the internal changes Apple has made on its last Intel-based Mac. As previously reported, the new iMac comes with an SSD that’s soldered to the logic board, though the RAM continues to be user-replaceable.

The design and shape of the logic board on the new 27-inch iMac is the same as the previous 2019 model. The only major difference here is that the shift to an SSD means there’s a lot of free storage space inside that was previously taken by the spinning hard disk. The shift also means that the logic board no longer features any SATA connectors for the hard disk as well. There are also solder points and mounts for the 4TB and 8TB SSDs for the iMac which require an expansion board.

The upgraded 1080p FaceTime HD camera is now attached to the LCD panel so one has to be careful when opening the iMac as there’s now an extra connector cable that needs to be disconnected. There’s also an extra microphone that’s stuck to the bottom of the case, with the other microphone being in the same position as last year. Interestingly, despite the speaker being upgraded on the new iMac for higher fidelity, they seem to be the same as the previous iMac.

What’s interesting is that despite a lot of internal space being freed up due to the removal of the spinning hard disk, Apple has not upgraded the cooling system on the new iMac and adopted a solution similar to the iMac Pro. The company could have done this likely due to cost reasons as the iMac is easily among the most value for money machine in Apple’s lineup. Plus, the iMac is already due for a redesign and Apple is rumored to launch a new 24-inch iMac later this year with its Apple Silicon chip.