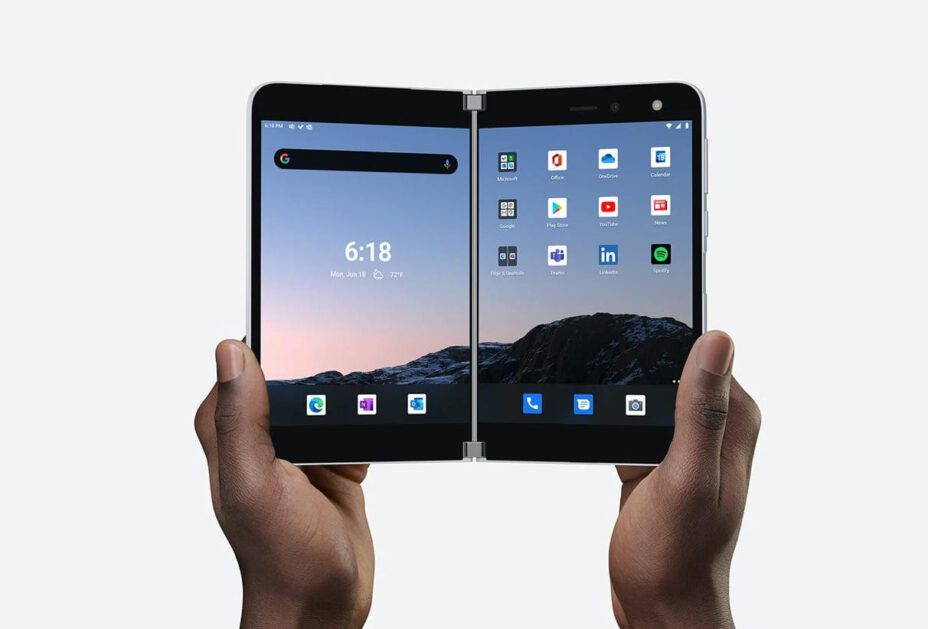 Microsoft is launching its Surface Duo dual-screen Android phone on September 10th, priced from $1,399. After months of Microsoft executives teasing the device on Twitter, the company is now allowing anyone to preorder the Surface Duo today in the US. Preorders will be available at AT&T, Microsoft’s online store, and Best Buy.

While Microsoft had revealed the design of the Surface Duo back in October, the company has kept the specs relatively secret. The device includes two separate 5.6-inch OLED displays (1800 x 1350) with a 4:3 aspect ratio that connect together to form a 8.1-inch overall workspace (2700 x 1800) with a 3:2 aspect ratio. Unlike foldables like Samsung’s Galaxy Fold, the Surface Duo is using real Gorilla Glass, and the displays are designed to work in a similar way to multiple monitors on a Windows PC.

One big question over the Surface Duo has been the camera. Microsoft is using an 11-megapixel f/2.0 camera, which will include auto modes for low light, HDR multi-frame captures, and a “super zoom” up to 7x. Both 4K and 1080p video recording will be supported at 30fps and 60fps, with electronic image stabilization. There’s only a single camera on the Surface Duo, which can be used both for video calls and as a main camera.

The basic Surface Duo hardware also consists of a Qualcomm Snapdragon 855, 6GB of RAM, and up to 256GB of storage. LTE is available on T-Mobile, AT&T, and Verizon, but there’s no 5G support at all. Microsoft is also shipping a bumper cover in the box, designed to protect the Duo.

Microsoft is also including two batteries in the Surface Duo, split beneath both displays. Overall there’s 3577mAh of capacity, which is considerably less than the 4500mAh found on Samsung’s single-screen Note 20 Ultra and even the 4380mAh on the original Galaxy Fold. Despite this, Microsoft is promising “all day battery life,” which means up to 15.5 hours of local video playback, up to 10 days of standby time, and up to 27 hours of talk time. We’ll need to fully test the device during our review, but the capacity here does leave a little cause for concern as the device is powering two screens, not one.

“It’s probably one of the sexiest devices we’ve ever built,” says Windows and devices chief Panos Panay in a press briefing ahead of today’s launch. “It does things that single-screen devices can’t do, period.” Panay’s vision for the Surface Duo is to improve productivity on the go, and Microsoft has also been doing some interesting work on the software side to compliment the hardware.

Any Android app will run on the Duo without modification, thanks to the choice of two separate displays. “Any app has to run,” says Panay, and it was obviously important to support everything Android from day one. Developers can also optimize the layouts of their apps to really take advantage of the two displays and span across them. Microsoft has tweaked its own apps like the Office suite and OneDrive to span the displays, and third parties like Amazon have also done work on the Kindle app to make it feel like you’re reading a book by flicking pages across the two screens.

Microsoft is also using algorithms to predict how to open apps on different displays. “There is an algorithm in there that’s very smart and trying to be predictive,” explains Panay. “If you’re on one screen and you’re invoking a link, it will fill the other screen.”

READ MORE:  Microsoft Indicates Interest in Acquiring TikTok in the United States
ANY ANDROID APP WILL RUN ON THE SURFACE DUO

The end result is that if you click a link in an email app on one screen, it will open on the other so you can continue to read the email side by side with a webpage. Apps like Microsoft Teams and PowerPoint are also optimized so you can see a video call and the rest of your Teams chat, or look at a full slide and the rest of the deck simultaneously.

Microsoft has been working closely with Google on Android for the Surface Duo. “It was interesting at first,” says Panay, referring to the initial days of the partnership. “It was a bit of a head scratcher. Satya and I had a lot of conversations.” Microsoft had to go with Android for the pure reason of mobile apps, especially after Windows Phone failed in the market.

“Microsoft has to light up on every platform,” says Panay. “We had a conversation with Google… the partnership has been crazy fun. I think at first there’s a little bit of getting to know each other, but then very quickly we saw what’s right for our customer and what can be possible. I think it’s great for Google and Android, and I think it’s great for Microsoft.”

Microsoft has created APIs for dual-screen apps to work in the Android codebase, and it plans to upstream them for other manufacturers and third parties to use. It’s part of a broader push to make dual-screen and foldable devices a reality, and Panay is very much a believer in this future. “I believe that two screens are coming, I think they’re needed.” It will be interesting to see how developers adapt their Android apps here, and it’s key to the overall success of dual-screen or foldable devices in general.

READ MORE:  How to get Microsoft Office for free

Price will be a sticking point for Surface Duo, just as it was for the Galaxy Fold and other devices that will try to usher in a foldable or dual-screen future. A lack of 5G and NFC, questions over battery life, and the camera quality will all need to be addressed in our Surface Duo review, but Microsoft is clearly at the start of a future it believes in. You’ll have to pay a price to be part of that initially.

The real question will be how well Surface Duo, and devices like it, improve productivity on the go, and whether two mobile screens is truly needed. These devices will ultimately require some hardware advances to really pull off the vision. But if consumers agree with Microsoft, Samsung, and others that two screens are better than one then we’re witnessing the future being built. If not, we’re witnessing unique attempts to try and reshape mobile devices. At the very least, mobile phones are suddenly getting exciting again. As Panay would say, we’re pumped to see where this all goes.

The smartphone market has changed quite a bit since Microsoft had initially announced the Surface Duo. There’s now the Galaxy Z Flip and the stunning Galaxy Fold 2, both of which make for a far more compelling buy than Microsoft’s offering here. What’s worse is that the Surface Duo specs don’t do justice to its extremely high price tag. What do you think about the Surface Duo and its price tag of $1,399?

READ MORE:  Kernel Bug for iOS 14.1 and Below Raises Hope For Possible Jailbreak