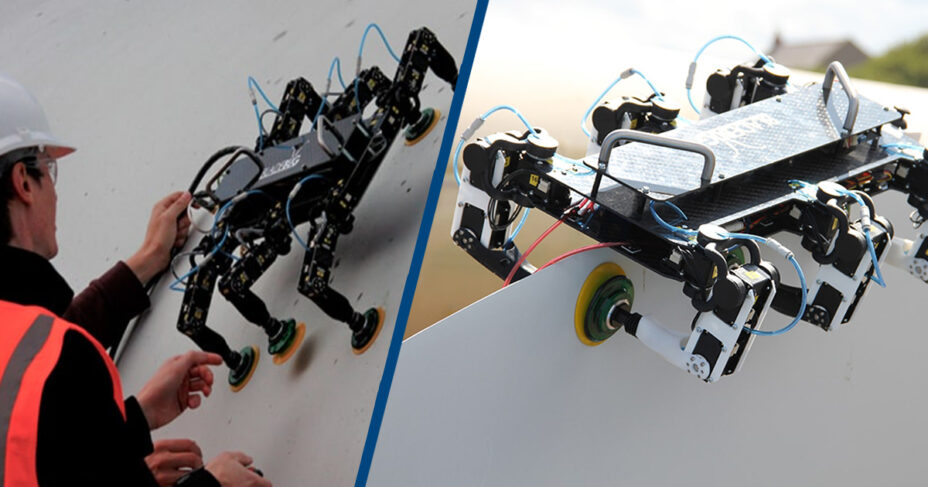 In mid-October, a six-legged inspect-and-repair robot called BladeBUG repeatedly walked on the blades at UK’s ORE Catapult’s 7MW Levenmouth Demonstration turbine off the coast of Fife. The event marked the first time ever that a robot scaled the blades of a wind turbine.

Why is it important? Because such technology could reduce the cost of blade inspection techniques by over 30%. The novel robot is the result of a $1,315,750 (£1 million) collaboration project between BladeBUG and ORE Catapult, part-funded by Innovate UK.

Once completed by the end of the next year, BladeBUG will be able to scan blade surfaces for cracks and imperfections and communicate its findings back to shore. “This is an incredibly significant technology that we know is being keenly watched by the industry as a potential game-changer,” said Chris Hill, ORE Catapult’s Operational Performance Director.

The first-ever blade walk on an operational offshore wind turbine has now proven the robot’s many capabilities. During the test, it traversed 165 feet (50 meters) on a vertically positioned blade on the Levenmouth turbine.

READ: The Amount of Starlight Emitted Since the Beginning of Time

This blade has a length of 275 feet (84 meters) with the tip reaching 640 feet (195 meters) above the sea when upright. That’s quite an impressive journey for our little six-legged robot but what is even more impressive is the many benefits it brings.

“It has a clear potential for cutting costs, reducing human offshore deployment, and increasing blade lifetimes. But, we had yet to see how the robot would perform on a real turbine out at sea. I consider BladeBUG’s first walk at Levenmouth as offshore wind’s ‘moonwalk’ – a historic milestone in the industry’s evolution. Robotics are here to stay, and they will be an essential ingredient to operating ever-expanding wind farms, deeper-water sites, and faster, bigger turbines in the coming years,” Chris Cieslak, BladeBUG CEO added.

READ MORE:  15 Most Interesting Recent Patents You Should Know