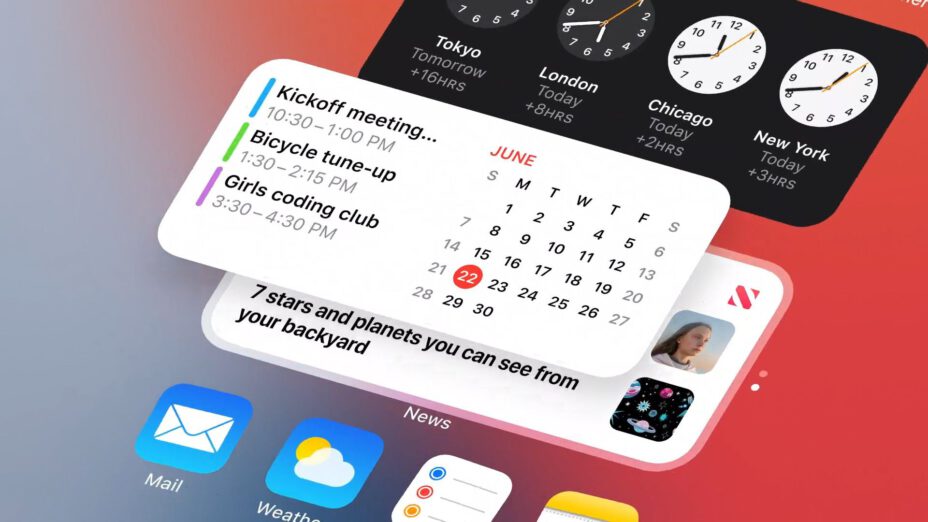 Apple announced iOS 14 during the WWDC 2020 developers conference. The new version of iOS brings dozens of new features, including new home screen layout options, widgets on the home screen, new Siri UI, a smaller call screen, App Clips, improved Messages and Apple Maps apps, and more. While iOS 14 is among the most exciting iOS update we’ve seen in the past few years, we can’t help but notice some features that Apple copied from Android.

Apple and Google are known to copy (or get inspired by) software features from each other’s operating systems. For example, Apple copied quick setting toggles from Android and called it Control Center. On the other hand, Google coped gesture navigation from iOS. Today, we are going to list fourteen iOS 14 features that first appeared on Android in one form or another.

Widgets have been in iOS for quite some time now, but they were earlier restricted to the Today View. Now, Apple has allowed them to be placed alongside apps on the iOS home screen. Widgets also come in various shapes (rectangular and square) and sizes. When you place widgets on the home screen, app icons move and adjust automatically to make room for the widget. Android allowed placing apps and widgets side by side for over a decade now.

Based on your usage, iOS 14 shows dynamically suggested apps. These are the apps that you’re most likely to use, and the suggestions keep on changing based on the time of the day. This feature first debuted on Android with the Pixel launcher on Google’s own Pixel smartphones. Now, it is available on iPhones running iOS 14. Android 11, which is in the public beta phase, even has an option to replace the favorite apps on the app dock with suggested apps.

The picture-in-picture (PiP) mode, which Apple debuted on tvOS and iPadOS, is now available on iPhones, thanks to iOS 14. However, Google first brought this feature to Android with Android 8.0 Oreo back in 2017. In iOS 14, you can move the PiP window around the screen, no matter which app you’re using, and it also shows up on the home screen. You can use this feature to watch videos or view video calls even when you’re using other apps. The PiP mode on Android works similarly.

The Wind Down mode, which was announced for iOS 14 yesterday, is the exact same name that Google uses on Android. Google introduced the Wind Down mode on Android devices with Android 9 Pie two years ago. It is a part of Google’s Digital Wellbeing tools, and it turns the device’s screen into the greyscale color mode, something that’s missing in iOS 14. With Android 11, however, Google has renamed this feature to Bedtime Mode.

iOS always had all the app icons on the home screen, and it lacked a dedicated app launcher. On the other hand, the stock version of Android always had a dedicated app shelf. With iOS 14, Apple has introduced App Library, a dedicated section that shows all the installed apps. It categorizes apps based on category, creates a group folder, and gives it a relevant name. Although it’s not exactly like Android’s app drawer, it is a different take on the same idea.

For years, many users have been complaining about the calling screen eating up the entire screen on an iPhone or iPad. With iOS 14, Apple solved the problem by offering a smaller call UI that appears towards the top of the screen, like a banner notification, and it offers options to accept or reject a call. You can navigate around the whole UI on your iPhone even when the incoming call notification is being shown. This feature has been present on Android for a long time, though, and Apple certainly drew inspiration from Google’s smartphone operating system.

App Clips is a mini version of an app that you can use without installing the complete app. App Clips are smaller than 10MB in size, so they launch almost instantaneously. App Clips can be launched by scanning NFC tags or dedicated App Clip codes or QR codes, and they have Apple Pay integration. They’re designed to let you use specific sections of an app when you need them. However, this functionality first debuted on Android four years ago as Instant Apps. However, I agree that Apple has done a better job by integrating more features such as Apple Maps, Apple Pay, and Messages.

Earlier, Siri used to take up a considerable area of the screen. However, with iOS 14, Apple is offering a compact UI overlay when you summon Siri. It shows the Siri animation towards the bottom of the screen, and whatever answer or result Siri displays appears in a small overlay towards the top of the screen.

Apple Maps has improved a lot since its debut with iOS 6. However, it is still no match for Google Maps in terms of data and locations, especially outside of the US. Surprisingly, Apple Maps lacked the Cycling Directions, something that has been a part of Google Maps for a long time now.

Despite offering Car, Mass Transit, and Ride Sharing modes, iOS lacked the Cycling Directions until iOS 14. Thankfully, Apple has added the much-needed feature inside Apple Maps, and it could be really helpful for some people as it shows elevation data and how busy the streets are.

The Translate feature is also integrated into the Safari web browser on iOS 14. This feature has been a part of Android through Google Chrome for quite a few years now, and it supports many more languages in comparison. Hopefully, Apple adds support for more languages in the future and makes it as good as Google Chrome on Android.

Thanks to the Neural Engine on Apple’s A-series processors, a lot of machine learning (ML) processes can happen directly on the device, without a need to send data to Apple’s servers. The processing happens quite fast as well, and it negates the need for an active internet connection. Apple is using this capability to bring voice recognition (speech-to-text) on the device with iOS 14 for the keyboard.

Your voice recordings and voice data aren’t sent to Apple’s servers or its partners’ servers. This on-device language translaation feature has been a part of Pixel phones for a while now, and it remains to be seen if Apple’s on-device voice recognition for the stock keyboard app is as good or fast as Android’s version.

Continuing its emphasis on data security and user privacy, Apple introduced a much-improved version of Safari on macOS Big Sur that shows a privacy report and cross-website trackers. For iOS 14, the Cupertino-based tech giant introduced a similar feature. Safari also shows if any of your login passwords have been breached in data leaks. Safari cryptographically checks your passwords and compares them to leaked passwords that are revealed in data leaks across the world to notify you.

Google introduced a similar feature last year with the Password Checkup Chrome extension for desktops and then integrated it into Google account’s password manager. Later the functionality was integrated into Chrome for Android by the end of last year. Six months later, Apple showcased this feature for iOS 14 during WWDC 2020.

Apple is finally offering a search interface for finding emojis inside iOS 14’s keyboard app. I don’t know why it took so long for Apple to offer this feature even though the company has always been a step ahead of Google in releasing newer emojis for iOS and iPadOS. The emoji finding feature has been a part of the Gboard app on Android for years now, and Apple might have taken cues from Google for iOS 14 and iPadOS 14.

What do you think about Apple copying or getting inspired by Google’s Android? Do you think Apple does a better job than Google in implementing features? Let us know which features did you liked the most on iOS 14 even though they were inspired by Android.