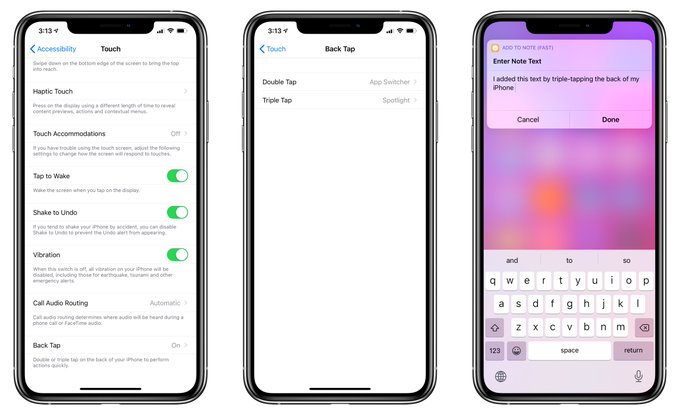 Apple revealed most of the new iOS 14 features at the WWDC keynote. Meanwhile, some of the other features are slowly being discovered. One such feature is the Back Tap. The new feature allows iOS 14 users to access custom features by tapping the iOS device on the back.

The Back Tap feature will let you assign shortcuts for a number of apps like Apple Music, Siri Shortcuts, Screenshots, and more. Frankly speaking, the possibilities are limitless. Think about it, you could simply tap on the back of your iPhone to switch on the light in your living room. We hope Apple integrates Back Tap with all the important features. Moreover, the Back Tap also doubles up as an accessibility feature for users with impaired motor skills.

The Back Tap is available on the iOS 14 beta. If you have already installed iOS 14 beta follow the steps below to activate the Back Tap feature.

You can also configure what apps/features two or three taps should trigger. Interestingly, the feature works even with a case on! Well, HTC used to offer a similar feature that allowed users to open apps or access features by squeezing the device.

READ: 21 Hidden iOS 14 Features That You Should Check Out

The Back Tap feature on iOS 14 seems like a handy addition. It is fairly difficult for iPhone 11 Pro/Max users with small hands to access features like screenshots by pressing the keys. This is where the Back Tap will come in handy. Back Tap feature is still in beta and might have some niggles. Moreover, we are not sure how iOS 14 will handle accidental back taps and whether the feature can be used when the iPhone is locked.

If you have installed iOS 14, give Back Tap feature a try and share your thoughts in the comments below.