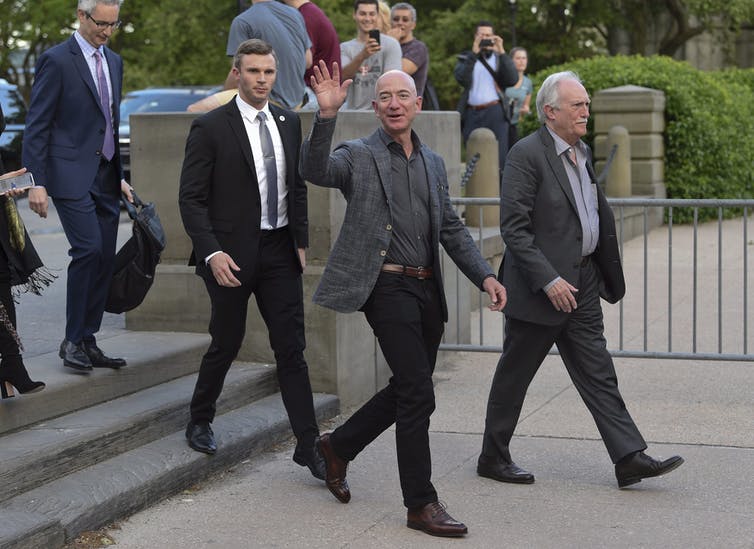 Millionaires are quite common, and usually don’t stand out much in public. Many millionaires will tell you that they don’t “feel rich”, largely because the value of a million dollars has changed dramatically over the past 100 years. To have the same buying power in today’s terms, $1 million in 1900 would be the equivalent of about $27 million today. This is why the bar for being considered an ultra high net worth individual is at least $30 million.

So even though there are literally millions of millionaires (+10 million in the US alone), only about 28,000 people are considered ultra high net worth. That still leaves a lot of room to live “under the radar” and be able to go out in public without attracting too much (or any) attention.

On the other hand, there are about 2,000 billionaires globally and they are fairly well known. They’ve been in the business press and often attract attention wherever they go just because of the influence they have. So look for bodyguards and additional security anytime they are in public. They may not be the obvious Hollywood depiction of bodyguards as this draws even more attention: That level of security is appropriate for a public event with lots of press. Like this one: However a cadre of ominous looking bodyguards is inconvenient to have around if you just want to meet a friend for dinner, play a round of golf, attend a wedding, or just take your kids out to Disneyworld. It actually attracts more unwanted attention, while adopting a lower profile might allow them to easily pass unnoticed.

Also Read: Do Billionaires Have Special University They Attend?

For smaller events and public excursions there will almost always be a small (1–3 person) security detail nearby, usually within 10–20 feet depending on the risk level of the venue, and they will likely try to blend in and be “invisible“ until needed. At a party or open event they will usually go out of their way to keep their hands free and will never be drinking alcohol, which makes them easy to spot.

Having bodyguards and/or a full time security detail is extremely expensive and not something a “mere” millionaire would spring “just to have around.”

READ MORE:  12 Things You Should Give Up If You Want To Be Successful