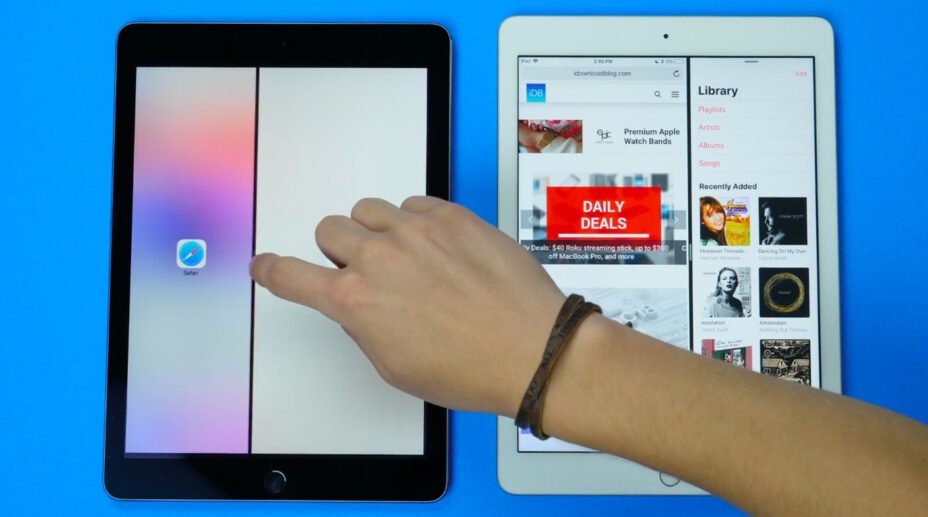 Split View on the iPad is a powerful multitasking feature that lets you use two supported apps on the screen at the same time. Still, it can be confusing to figure out how it works, and mastering it takes practice.

Continue reading to unfold how to use it.

What Is Split View?

Split View displays two windows side by side in split-screen mode with a black partition in the middle. It is designed for using two apps at the same time in a situation where you may need to continuously reference each one or move information from one to the other. Not every app supports Split View, but most official Apple-made apps do. Third-party developers must specifically choose to support the feature for it to work properly. There is no master list of Split View supported apps, so you’ll have to use trial-and-error to see if your favorite apps work with it.

What Is the Difference Between Split View and Slide Over?

iPad’s other primary multitasking feature, Slide Over, displays a primary app in full-screen mode and secondary app in a small floating window on the left or right side of the screen. The Slide Over window can be quickly dismissed and called back when needed, making it ideal for checking information from an app quickly while working on something else.

READ MORE:  iOS 14 ‘Back Tap’ Feature Lets You Open Apps and More by Tapping the Back of Your iPhone

The main differences between Split View and Slide Over are how much screen real estate each of the two apps takes up, and that each is suited to different types of tasks.

How to Use Split View on an iPad

To use Split View, open an app. This will be one of the two apps you use on the screen at the same time. To open a second app, you first need to make sure it is added to your Dock.

With the first app you want to use already open, slowly swipe up from the bottom of the screen to open the Dock. Read: A Step-by-Step Guide on How to Use Your iPhone as a Webcam

Find the second app you’d like to open, place your finger on its icon, and hold it for just a moment. (But not too long, or you’ll trigger a pop-up menu.) Slowly drag the icon upward off the dock toward the direction you’d like to place the second window. After a moment, the icon will become part of a blurry rectangular box with rounded edges. Keep dragging the icon with your finger toward the far left or right edge of the screen where you want the second window. Near the edge of the screen, the first app separates from the edge with a black border, and that is how you know you are about to enter Split View mode. (This is important to note because it is easy to place the app in Slide Over mode instead by accident.) Once the icon you are dragging is located over the black border, you can release your finger, and the second app will snap into place. Then you’ll see Split View: two apps on screen with a black partition in the middle between them.

Read: How to access iCloud Drive files from your iPhone and other devices

If it didn’t work, then you either didn’t get the maneuver just right (it is tricky and takes practice), or the app does not support Split View mode. In that case, try again, or try with a different app.

Using your finger, you can drag the partition left or right and resize both windows proportionally, making one app wider or narrower than the other according to your preference. How to Get Rid of Split View on iPad

If you’d like to dismiss Split View, you need to get rid of one of the windows. Place your finger on the center of the black partition line, and drag it at a steady medium speed toward the right edge of the screen. As you slide closer to the edge of the screen, the apps will blur out, and you will see two windows with the apps’ icons in them instead. Keep sliding your finger to the right. Toward the very edge of the screen, the black partition between the two windows will begin to grow wider (this visually signifies that you are about to “break up” Split View). Keep sliding your finger until you reach the edge of the screen. Read: How to Use Face ID on Your iPhone While Wearing a Mask

Once at the edge of the screen, release your finger, and the Split View should be gone. Multitasking features on the iPad can be quite handy and powerful if you get the hang of them. Because of the nuances of the gestures involved, they do take patience and practice to get just right.

READ MORE:  How to Prepare Your iPhone for iOS 14 Release

On the other hand, if you prefer to use the iPad as a single-task device, or you keep bringing up extra app windows by accident, you can easily turn off Split View and Slide Over in the Settings.