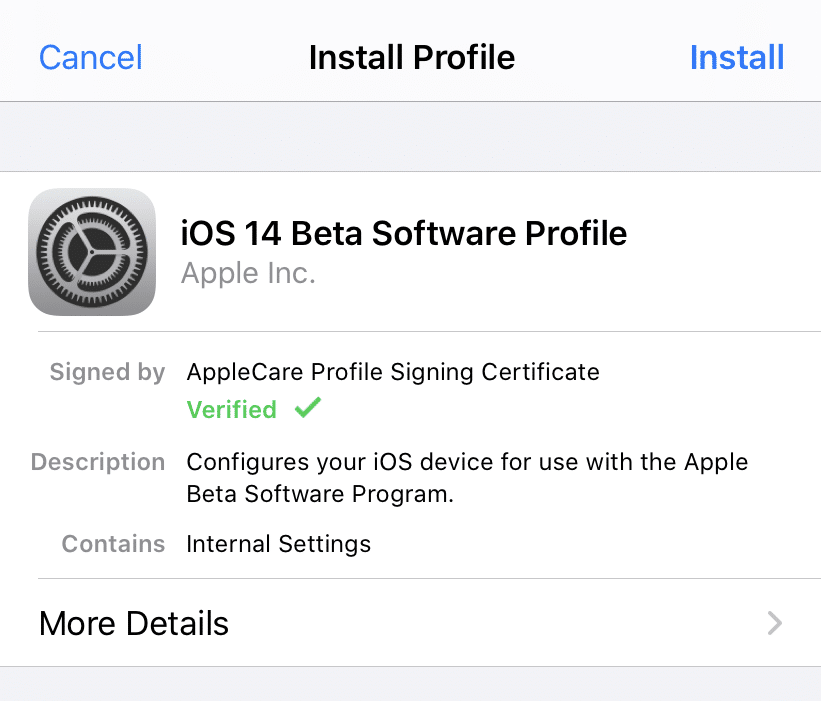 Apple did not release a beta profile for the iOS 13 beta last year. This time around though, the company has made the beta profile as well as the IPSW available for download to developers. This means you can get the iOS 14 beta 1 OTA update on your iPhone as well. Even better, you don’t really need to be a developer for this. You just need to get your hands on the beta profile.

The good thing is that Apple is supporting iPhone 6s and higher with iOS 14. As for iOS 14’s release date, it will release in fall this year which likely means September.

How to Install iOS 14 Beta for Free Using Beta Profile

Step 1: Get your hands on the iOS 14 beta profile for iPhone from your friend or someone in your family who has access to the Developer Account. Alternatively, you can also find the beta profile easily on some social media platforms. AirDrop the file to your iPhone or simply email the beta profile to yourself.

Step 2: Proceed to open the emailed iOS 14 beta profile link on your iPhone. You will be automatically redirected to ‘iOS Beta Software Profile’ once the download is complete. Make sure to use Safari to download the file.

Step 3: Go to Settings -> General -> Profile where you will see the iOS 14 beta profile. You will have to tap on ‘Install’ three times before selecting the ‘Reboot’ option.

Step 4: Once your iPhone reboots, head over to Settings -> General -> Software update. The iOS 14 developer beta OTA update should show up for download for your iPhone. If not, wait for a few minutes and try again. If that still does not work, restart your iPhone again.

READ: iOS 14 Support: Which iPhones Are Compatible with iOS 14?

Once you install an iOS 14 beta on your iPhone, it will automatically receive all future beta OTA updates directly from Apple as well. Since iOS 14 is still under development and this is the first beta we are talking about, there are going to be plenty of bugs and issues. Ideally, you should report them to Apple so that they are fixed in the next beta or before the final release of the OS.