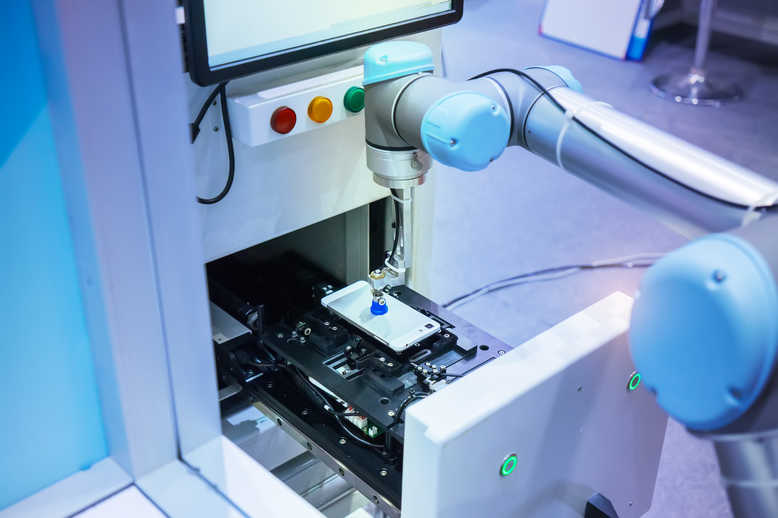 Mobile phone is an electronic device used for mobile telecommunications over a cellular network of specialized base stations known as cell sites. A cell phone offers full Duplex Communication and transfer the link when the user moves from one cell to another. As the phone user moves from one cell area to another, the system automatically commands the mobile phone and a cell site with a stronger signal, to switch on to a new frequency in order to keep the link.

Mobile phone is primarily designed for Voice communication. In addition to the standard voice function, new generation mobile phones support many additional services, and accessories, such as SMS for text messaging, email, packet switching for access to the Internet, gaming, Bluetooth, camera with video recorder and MMS for sending and receiving photos and video, MP3 player, radio and GPS.

The cellular system is the division of an area into small cells.
This allows extensive frequency reuse across that area, so that many people can use cell phones simultaneously. Cellular networks has a number of advantages like increased capacity, reduced power usage, larger coverage area, reduced interference from other signals etc.

Codes in the Mobile Phone

Mobile phones have special codes associated with them. These include:

ESN is a permanent part of the phone while MIN and SID codes are programmed in the phone when a service plan is selected and activated.

Mobile phone is a Duplex device. When we use one frequency for talking, a second separate frequency is used for listening. So that both the people on the call can talk at once. The Mobile phone can communicate on 1,664 channels or more. The Mobile phones operate within the cells, so that it is easy to switch on to different cells as they move around. A person using a cell phone can drive hundreds of kilometers and can maintain a conversation during the entire time because of the cellular approach.

SIM card (Subscriber Identification Module (SIM)) is a type of Smart card used in mobile phone. The SIM is a detachable smart card containing the user’s subscription information and phone book. This allows the user to retain his or her information even after switching off the handset. Alternatively, the user can also change service providers while retaining the handset simply by changing the SIM. SIM card Securely stores the service subscriber key having 15 digits.
The digits of the key are :

When the Mobile phone is used for the first time, it sends a number called International Mobile Subscriber Identity – IMSI present in the SIM card to the network, which looks it up in a database to ensure the card is registered. If the IMSI is recognized, the network creates another number called a Temporary Mobile Subscriber Identity (TMSI), which is encrypted and sent back to the phone. In all subsequent calls, the phone identifies itself by broadcasting the TMSI.

What happens when we make a call?

Global System for Mobile Communications is the standard for mobile telephone systems in the world. In GSM, the signaling and speech channels are digital, therefore GSM is considered a 2G (Second Generation) system. This helps wide-spread implementation of data communication applications. There are five different cell sizes in a GSM network These are macro, micro, pico, femto and umbrella cells.

Umbrella cells are used to cover shadowed regions of smaller cells and fill in gaps in coverage between those cells.Horizontal radius of the cell varies depending on the antenna height, antenna gain and propagation conditions. Maximum distance the GSM supports is 35 kilometers. Most 2G GSM networks operate in the 900 MHz or 1800 MHz bands while 3G GSM in the 2100 MHz frequency band.

Mobile phone converts voice, text, multi-media messages or data calls into Radio Frequencies (RF). Mobile phone base stations transmit and receive these RF signals and connect callers to other phones and other networks. Mobile phone network is divided into thousands of overlapping, individual geographic areas or ‘cells’, each with a base station. The size of a cell depends on the area of coverage and the number of calls that are made in that area. The smallest cells are in crowded urban areas with large buildings and heavy population density, while the biggest cells are in rural areas, where people are dispersed.

There are two types of channels used in GSM . These are Control channels and Traffic channels.

These are responsible for housekeeping tasks such as telling the mobile when a call is coming in and which frequency to use. To ensure this handover works, the phone constantly monitors the broadcast control channel of up to 16 neighboring cells. In normal operation, phones continually adjust the power of the radio waves they send out to be the minimum needed for the base station to receive a clear signal. If a phone moves far away from its base station and if the signal is weak, the network consults the list and triggers a handover to a neighboring cell with best signal.

It is used to carry calls or other data from the mobile phone to the base station and vice versa. In the Traffic channel, voice or text data is carried in bursts. Each burst comprises two consecutive strings of bits (a series of signals representing 1s and 0s), each 57 bits long.

Inside the Mobile phone

Mobile phone is a sophisticated device using SMD components, Microprocessor, Flash memory etc. In addition to the Circuit board, Mobile phone also has Antenna, Liquid Crystal Display(LCD) , Keyboard, Microphone, Speaker and Battery. Below is the Block diagram of Mobile phone

The circuit board is the heart of the Mobile phone. It has chips like Analog-to-Digital and Digital-to-Analog conversion chips that translate the outgoing audio signal from analog to digital and the incoming signal from digital back to analog.Following are the Chips present in Mobile phone.

It is generally rated as having 40 MIPS (millions of instructions per second) to conduct calculations of signal manipulation at high speed. This chip deals with both compression and decompression of the signals.

It handles all the housekeeping tasks for the keyboard and display. It also deals with command and control signaling with the base station, and coordinates the rest of the functions on the board.

3.The Flash memory and ROM Chips of the Mobile phone act as a storage location for the phone.

These chips store the customizable options of the cell phone, as well as the entire operating system. The power and radio frequency sections of the phone, phone recharging and power management etc are controlled by this chip. It also controls several hundred FM channels. The RF amplifiers focus on signals that go in and out of the phone’s antennae.

Mobile phone is a delicate device and needs care for its proper functioning. Here are the common measures to keep the mobile phone in good condition.

Also Read: How do aeroplanes work – The science behind plane flight

A phone is “Cloned” when someone steals its ID number and is able to make fraudulent calls on the owner’s account. When the phone makes a call, it transmits the ESN and MIN- a unique tag- for your phone to the network at the beginning of the call. When the phone transmits its MIN/ESN pair, it is possible to capture the ESN-MIN pair. Using a Scanner device it is easy to modify another phone so that it contains your MIN-ESN tags. This allows the person to make calls on your account. Cloning may also occurs when the phone is repaired in an unauthorized service centre. It is possible to copy the data including images and video present in the phone.