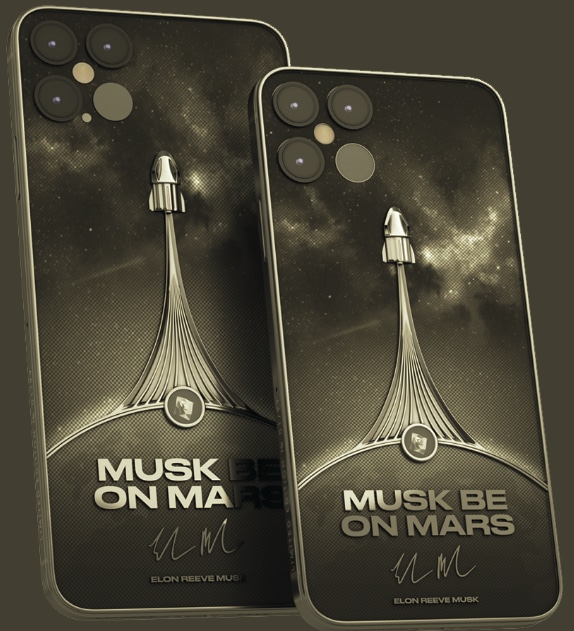 Caviar is known for offering customized solid gold iPhone casings. Recently, the Russian luxury brand announced a solid gold iPhone 12, that will be launched later this year. We have also seen custom-edition iPhone Cyberphone edition by Caviar. Keeping up with its fixation on Elon Musk, the company has started taking preorders for ‘Musk be on Mars’ custom iPhone 12 Pro.

The iPhone 12 Pro will be sold as a limited edition, and the prices start at $5000. As you can see, the limited edition comes with a custom backplate featuring SpaceX Dragon to commemorate the SpaceX crewed mission. Caviar says the back will be made out of titanium and will feature an engraving that says ‘Musk be on Mars.’ Also present is Elon Musks’ signature at the back.

Caviar claims a small piece of material is taken from the actual “SpaceX mission” and is embedded in the backplate. We are not sure if the claim is valid.

The body of the model Discovery Musk Be On Mars has a built-in real piece of the SpaceX mission that was in space. This is not just an accessory, this is a valuable artifact. Owning it, you become a member of a space shuttle crew, a piece of history, a hero who conquers the space.”

Caviar claims that it is only offering 19 ‘Musk be on Mars’ iPhones. If all the claims are indeed true, then the custom iPhone 12 Pro edition might end up being an artifact and eventually surge in value. Apple is expected to launch the iPhone 12 Series in October this year. Thanks to dummy units, we already know how the iPhone 12 would look like.