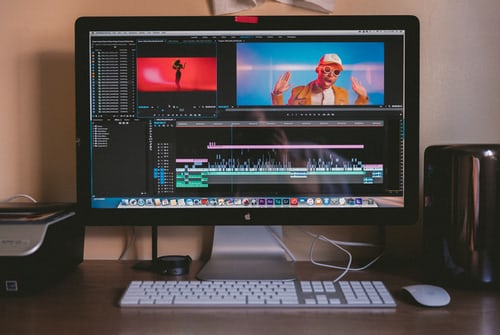 Many people are very confused when it comes to buying the best Mac for their music production. But not to worry because I’m here to give you a guide on how to make the best choice of Mac for your music production/career.
In this article I’m going to take a look at the available Apple computers on the market looking through the glasses of a music producer.

There was a time when music production required hiring a studio for the kind of money that would buy you a house. But time and technology moves fast.

During the 1980s, there was a revolution in analogue home-recording kit; then the 1990s saw home computers gradually take over. Today, you can do everything from recording pop songs to mastering movie soundtracks on a Mac. But which Mac? That’s the question we’re here to answer!

Mac vs PC for music production

Whether you choose a Mac or PC for music production is largely down to the platform you prefer and who you’re collaborating with. There’s little inherent advantage to using Macs when it comes to hardware, beyond familiarity with the system, and the general.

There is, however, some software – notably Apple’s own Logic Pro X (now Logic Pro X 10.5) and its enthusiast-focused cousin GarageBand – that is Mac-only. GarageBand is essentially a toy, albeit a powerful one in the right hands. It’s fine for the odd bit of recording and play, but pros favour more flexible software. Logic Pro X remains popular for recording work, as do the cross-platform Cubase, Ableton Live and Pro Tools.

Music software is notoriously hungry for memory. A lack of RAM becomes a serious bottleneck in any pro-level project. You’ll be able to run fewer instruments and fewer effects; you’ll spend more time rendering and less time doing things live. Consider 16GB your minimum. This shouldn’t be difficult now that all MacBook Pro models (with the exception of the two entry-level models) come with 16GB RAM as standard. You can of course add 16GB RAM to any model at the point of sale and we recommend that you do so.

Storage is also an issue. Hard drives can be a bottleneck due to their relatively low speed compared to SSDs, and they can be noisy. However, SSDs start out much smaller than hard drives, and are far more expensive. Entry-level Apple notebooks now have 256GB SSDs, but pro instrument and effects collections when installed can require hundreds of GB.

So you must figure out what you’ll need, and how assets will be stored. External drives can be fine for large sample libraries and the like, especially when connected using Thunderbolt, but you then need to determine how to take everything with you if you’re a musician who works with people in many different locations.

Before buying a Mac you must decide whether you need it to be portable or not. If you’re always moving around, working with various musicians in different countries, a massive iMac won’t fit in your hand luggage. But if you’re a solo musician who only ever creates music in a home studio, you get more bang for your buck with a desktop machine.

You also need to examine other kit you want to use. If you don’t have any – if all of your music-making happens inside a Mac – then this won’t be a concern, and in theory any Mac might do. But if you’ve a pile of audio interfaces, USB instruments, headphones, monitors, and other vital hardware, trying to get by the two USB-C ports found on the MacBook Air and entry-level MacBook Pro models will drive you to despair.

Processing power for music production on a Mac

High-end audio work can be extremely processor intensive, especially when using professional plug-ins and effects. If your demands are great, you’re going to need a Mac with fairly serious processing power. Ergo, whichever Mac you decide to buy, avoid low-end models that seem to lurk in the line-up to enable Apple to say ‘from’ and use a lower price-tag in marketing material.

There’s also the question of the GPU. Historically, recording and editing audio didn’t utilise many graphics card resources, unlike 3D design and video editing. Things are more complicated these days as some audio software is GPU-accelerated. It’s also a factor should you require additional displays.

If you’re a musician on the road, the only Apple notebook really worth consideration for music-making is the MacBook Pro. Just bear in mind the fans can get loud, if you’re recording in the same room.

Apple doesn’t tend to update the entire MacBook Pro range in one go though and the different models are very different beasts – so keep in mind that all models are not equally good.

Newly updated for 2020 are the mid-range MacBook Pro models, which gained new 10th-generation quad-core processors and 16GB RAM as standard. They still feature integrated graphics (the 16in models that we’ll mention next have discrete graphics).

Simple Steps on How to Take a Screenshot in Windows