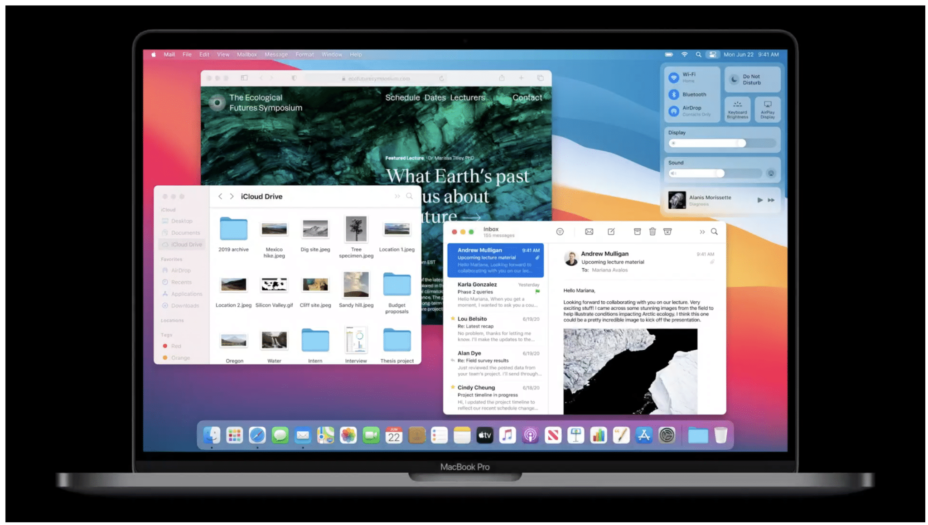 According to Apple, macOS Big Sur is the single biggest redesign macOS has seen since macOS 10. The new version of macOS brings a complete design makeover with a more modern and slicker look. Apple has redesigned all the basic UI elements such as buttons, scroll bars, icons, radio buttons, and more. You can have a look at the list of all the Macs that are compatible with macOS Big Sur.

Starting off with app icons, Apple has also refreshed them for most of its stock apps. It also added mono-colored glyphs in various places such as the menu bar and the sidebar. Animations have been made smoother as well, so scrolling, zooming, and screen transitions look more fluid. The menu bar now looks cleaner, thanks to the transparent background to compliment the slick design of macOS 11 Big Sur. Window corners are now rounded

Craig Federighi, Senior VP of Software Engineering at Apple, said, “macOS Big Sur is a major update that advances the legendary combination of the power of UNIX with the ease of use of the Mac, and delivers our biggest update to design in more than a decade. With its modern and clean look, huge improvements to key apps including Safari, Messages, and Maps, and new privacy features, we think everyone is going to love the breakthrough experience that macOS Big Sur offers.”

READ MORE:  This Mac App Lets You Check the Battery Level of Your iPhone, AirPods, and Other Apple Devices

With macOS Big Sur, Apple is bringing Control Center to Macs. Control Center, which appears on the top-right corner of the screen, shows display brightness bar and volume control as well as toggles for Bluetooth, Wi-Fi, Do Not Disturb Mode, and Keyboard Brightness. It also shows AirPlay controls and the music player widget. This is quite similar to Control Center on iOS 14 and iPadOS 14, but it is even better in some regards.

Apple has also redesigned widgets on macOS Big Sur, so now they appear more modern and stay alongside notifications. Developers can now bring their own widgets to macOS as well. There’s also an all-new widgets picker, and it shows all the available widgets in full-screen so that you can view more widgets in a single view and choose easily.

Similar to iOS 14 and iPadOS 14, the Messages app on macOS Big Sur brings new features such as newer Memojis, Memoji Stickers, mentions, threaded replies, Pinned Conversations, and much more. There’s a new Photo Picker UI as well. Thanks to Pinned Conversations, you can keep important contacts at the top of the conversations list. Groups can now have profile images and avatars. The improved search inside the Messages app is now more powerful and you can find things that you’re looking for in an easier way.

Apple is also bringing an all-new Apple Maps app for Macs with macOS 11 Big Sur. The new app brings new maps data across the US and a few other countries such as Canada, Ireland, and the UK. New features include favorite places, Guides, Indoor Maps, Lookaround, Lists, and ETA for friends’ locations when they share their journey with you.

The new Safar web browser app has seen a huge upgrade with macOS Big Sur. Apple now claims that it is faster than all other browsers in the world, and it is apparently 50% faster than Google Chrome. The company has also made it more power-efficient, and Apple claims that the new Safari app sips less power and offers more battery life on MacBooks. Safari’s start page can now be customized as well, and you can set wallpapers and even use your own images for backgrounds.

When you open a lot of tabs in the new Safari app, the size of tabs gets smaller. However, you can hover over tabs to see a preview of the webpage, making it easier for you to identify tabs. Safari is also getting the native language translation feature, so if you visit a webpage that’s not in your language, Safari can automatically convert text to your language.

Apple is also bringing more third-party extensions to Safari and improving user data privacy. Safari shows the privacy report for all the websites, and when you click the shield icon on the left side of the universal address bar, you can see the website’s security certificate, trackers, and more information. When you install new Safari widgets, you’ll have to manually enable them. Even when you enable widgets, they’re not granted any permission. Safari asks permission for every extension before it starts working.