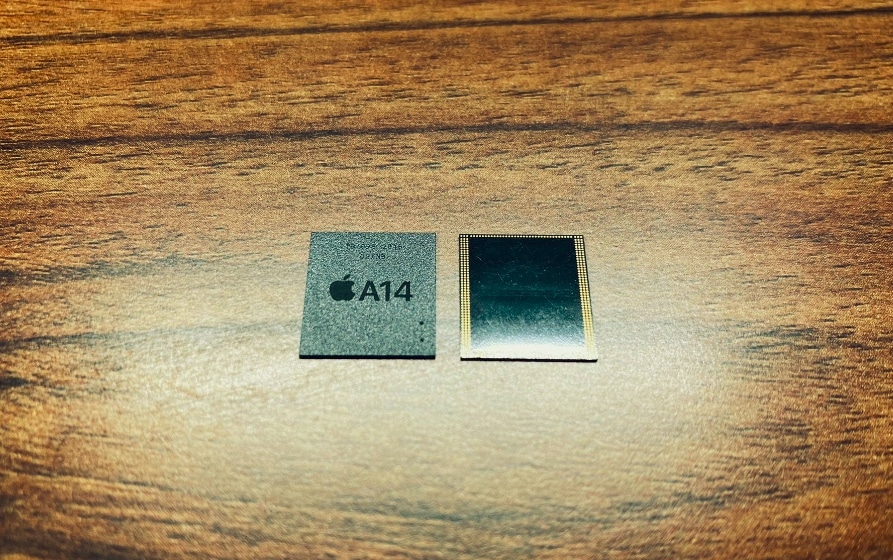 New details keep emerging in as we inch towards iPhone 12 launch. This time around, a set of alleged A14 Chip component pictures has been leaked on Twitter.

The leakster, “Mr.White,” has a decent track record when it comes to revealing info about upcoming Apple devices. Leaked pictures show off the RAM component of the A14 processor that is placed on top of the SoC. We were hoping for some additional information about RAM; however, we cannot deduce much from the pictures.

Apple is expected to launch four iPhone 12 variants this year. This includes a budget iPhone with a 5.4-inch display (with 4GB RAM), two variants with a 6.1-inch display, and one with a 6.7-inch display(with 6GB RAM). Upcoming iPhone 12 series will be powered by A14 chip, which is faster and more efficient. Furthermore, the 5nm A14 chip will make use of Neural Engine to perform AR and AI tasks much faster.

On the camera front, the budget iPhone 12 and the 6.1-inch iPhone 12 is expected to feature two cameras while the iPhone 12 Pro will come equipped with a triple rear camera unit alongside the Lidar scanner. Lastly, all the devices will support 5G and feature OLED displays.

READ MORE:  iPhone X: Everything You Need to Know
Tags: A14 Chip iPhone 12